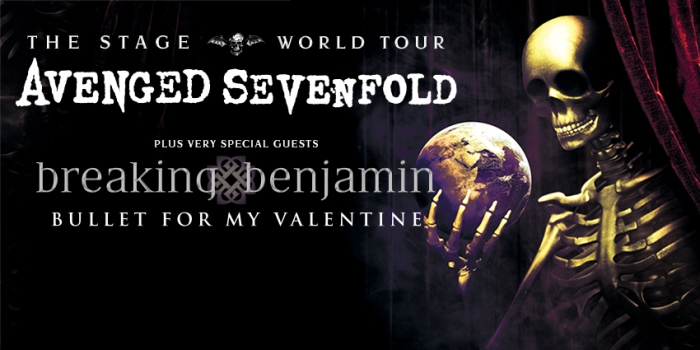 Those who know me personally know how big of a heavy metal fan I am. This weekend I had the privilege to see three of my favorite bands in concert: Breaking Benjamin, Bullet For My Valentine, and Avenged Sevenfold. It was by far one of the best concerts I have ever been to. Just looking around at all the people and knowing we were all enjoying something together was out of this world. It made me start thinking about things that can bring the world together. In that concert hall, everyone was enjoying the music, and for once, we could all put aside our differences.

I took a moment to look around, and amidst the headbanging and screaming and singing, I could see smiles and probably some tears because there was no place anyone else would rather be. There was one person that stood out to me the most. My fiance pointed out a gentleman in his late 50’s early 60’s headbanging with the best of them, and I thought it was the greatest thing I had ever seen. He was among a crowd of people 20+ years younger than him, and he didn’t have a care in the world because those were probably three of his favorite bands and he was seeing them live.

We often forget about the amazing things in life when there are so many horrible things going on in the world. It seems our hearts become hardened to everything pure and good. We become cynical and bitter toward those little wisps of beauty, but sometimes, we have to remember to stop and look around. We have to remember to not allow our hearts to become hardened and try to be unified through the beauty in life. My favorite line is from one of Bullet’s songs, and I feel it pertains to many issues in life today:

These are our times, never forget.

No looking back, no more regrets.

One thing we’ve learned from our mistakes:

The harder the heart, the harder it breaks.

Published by B. R. Fairchild

Novelist. Daughter. Wife. Friend. I go by many titles. The question is...which one will you see? View all posts by B. R. Fairchild